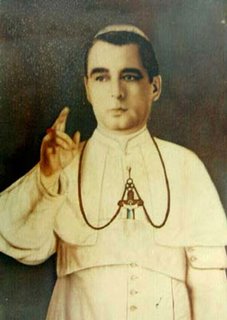 Antonio José Hurtado (Pedro II, 1939-1955) was a Colombian, self-trained dentist. After the death of Pope Pius XI in 1939, he proclaimed himself Pope Peter II, stating that he was elected by God. Hurtado’s claim to the papacy only ended with his death in 1955. Thus, his papal claim had nothing to do with the reforms in the Roman Catholic Church in the 1960s. The following text is not built on a detailed study of primary sources but mostly relies on secondary material, including some fine articles about this intriguing man (see list of references).

The future pope was born in 1892 in the small town of Barbosa, some 40 kilometres north of Medellín. As a young man, he studied at the Thomas Aquinas Seminary in Santa Rosa de Osos but left when his father died. Hurtado seems to have had great entrepreneurial skills and he was a quick learner. He moved to Bogotá, where he worked in many different areas without having formal training in any of them. Among other things, he became a carpenter, a tailor, a goldsmith and an ambulating photographer.

END_OF_DOCUMENT_TOKEN_TO_BE_REPLACED

An updated version of this article is found here

Chester Olszewski from the United States is one of the least known of the modern alternative popes. He was a cradle Catholic who converted to the Episcopalian Church and became a priest. From 1974, he served as a priest in Eddystone, Pennsylvania. In the following year, he became convinced that a statue of the Sacred Heart Christ, owned by a Catholic woman, Anne Poore, bled and bore the stigmata. Olszewski brought the statue to church, where he made it the central devotion.

Shortly thereafter, Olszewski and Poore claimed to be divinely chosen to restore the traditional Catholic faith; God had converted them to Catholicism. In order to re-establish the true Catholic Church, Olszewski needed to become a bishop and he soon found an independent bishop who provided him with the much sought-after apostolic succession.

On 31 May 1977, Olszewski proclaimed himself Pope Chriszekiel Elias at a ceremony in St. Lukes’s Episcopal Church in Eddystone, alleging that God himself had elected him and provided him with his new name. Later he began to call himself Peter II, the last pope in history.

Here you can read my article on the Pope of Eddystone, Anne Poore and their church. It’s the first more extensive study on the subject.

Chriszekal Elias a.k.a. Peter II: The Pope of Eddystone, Pennsylvania

Bryan Richard Clayton (Athanasius I, 2011-?) was born in 1975 in Chicago. He worked as a policeman and a security guard and then briefly attended the sedevacantist CMRI seminary in Omaha, Nebraska. According to some sources, he thereafter received training from a traditionalist Franciscan in Mexico. Clayton was ordained a priest around 2005, and in 2007, he was consecrated by Bishop Patrick Taylor of the Society of the Virgin Mary, who resided in Buckley, West Virginia.

END_OF_DOCUMENT_TOKEN_TO_BE_REPLACED

This church with its alleged centre in Argentina is a complicated matter. Or not. The thing is that the church does not exist in reality. It is an internet hoax. The “church” has never been able to proof its existence despite claiming to have a large number of cardinals, bishops and priests, so it should be considered a hoax. Still, the Remnant Church has very active web pages, and the alleged pope publishes many formal documents. Consequently, it’s created by a person or a group with much knowledge of this type of traditionalist group. It is a well-constructed hoax.  According to the creators since 2006, three men have been pontiffs of the Catholic Apostolic Remnant Church.

END_OF_DOCUMENT_TOKEN_TO_BE_REPLACED

Joaquín Llorens Grau (Alexander IX, 2005-). According to the group’s own information, a traditionalist missionary in Guatemala, Antonio Velasco founded the Congregación Mercedaria Sagrada Tradición Nuestra Señora de la Merced, Generala de los Ejércitos Celestiales, Corredentora. They claim that Velasco was consecrated by Bishop Moises Carmona of the Unión Católica Trento, who was in his turn was consecrated by Archbishop Thuc. There is, however, no independent support for this assertion. Together with six priests and nine novices, Velasco transferred to Elche (Elx) in Spanish Alicante.

END_OF_DOCUMENT_TOKEN_TO_BE_REPLACED

Lucian Pulvermacher (Pius XIII, 1998-2009) was born in 1918 in Bakeville, Wisconsin as Earl Pulvermacher. He joined the Capuchin order, as did his three brothers. Pulvermacher studied at different monasteries in Indiana, New York state and Wisconsin, before being ordained a priest in 1946. Two years later, he became a missionary to Japan, where he served on the Ryukyu Islands, including Okinawa, until 1970. Thereafter, the order sent him to Australia to work in Queensland. He stayed there until 1976, when he left the Capuchins without any prior notice, and returned to the United States, stating that he was unwilling to accept the post-Vatican II changes.

END_OF_DOCUMENT_TOKEN_TO_BE_REPLACED

Victor Von Pentz (Linus II, 1994-2007?) is a South African, born in 1958 to parents of Irish and German background. Von Pentz worked for South African Airlines util 1984. He studied at the seminary of the Priestly Society of St. Pius X in Winona, Minnesota in the late 1980s, but soon left the SSPX. Thereafter, he became an independent traditionalist priest, allegedly ordained by an Ukrainian bishop of the Byzantine rite and later ordained sub conditione by South African bishop Richard Bedingfeld of the Tridentine Latin-Rite church.

END_OF_DOCUMENT_TOKEN_TO_BE_REPLACED

David Bawden (Michael I, 1990-) was born in 1959 in Oklahoma City, Kansas. Aged eighteen, in September 1977, he entered the Society of Saint Pius X’s seminary at Ecône Switzerland, but soon left for their seminary in Armada, Michigan. Bawden was dismissed from the seminary in December 1978. Later, he appealed against the dismissal to Marcel Lefebvre and his appeal was accepted in the following year. In January 1980, Bawden took a position at the SSPX College in Saint Marys, Kansas, but encountering many “un-Catholic things” there, on March 5, 1981, he resigned. At the same time, he also left SSPX for good.

END_OF_DOCUMENT_TOKEN_TO_BE_REPLACED

On 26 October 1958, white smoke coming out from the famous Vatican chimney for five minutes indicated that a new pope had been elected after the demise of Pius XII. Somewhat later, however, this was reported a mistake; the conclave went on. The advocates of the so-called Siri Thesis mean that Guiseppe Cardinal Siri, the archbishop of Genoa, was legally elected at the conclave, and not the Patriarch of Venice, Angelo Roncalli (John XXIII).

END_OF_DOCUMENT_TOKEN_TO_BE_REPLACED

Magnus Lundberg
Create a free website or blog at WordPress.com.